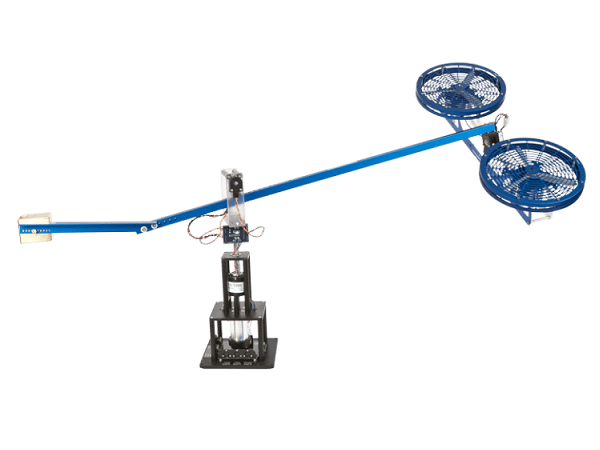 The 3 DOF Helicopter experiment provides a bench top model of a Tandem rotor helicopter. It can be used to understand and develop control laws for a vehicle that has dynamics representative of a dual rotor rigid body helicopter, or any device with similar dynamics.

The helicopter body is suspended from an instrumented joint that is mounted at the end of an arm and is free to pitch about its centre. The other end of the arm is fastened to the base using a two degree of freedom joint, allowing the helicopter to rotate about the vertical axis as well as up and down. The other end of the arm has an adjustable counterweight that changes the effective mass of the helicopter system – making it light enough to be lifted by the thrust from the propellers. All axes are measured using high-resolution encoders to obtain precise position feedback. The slip ring mechanism on the vertical axis allows the body to rotate continuously by eliminating the need for any wires to connect the motors and encoders to the base. The front and back propellers control the movement of the helicopter.

Your data is the data that allows us to make the first business contact. All data provided in the form are treated as confidential. Personal data appearing in the form will be processed in accordance with our privacy policy, available at www.edu4industry.com.